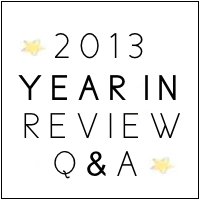 Aren’t memes brilliant? Well I like them anyway and I’ve been tagged in this one by that thoroughly bloody nice chap known to the blogging world as English Dad. It was started by Oh So Amelia and it’s a belter. The idea is to look back on blogs and blogging in 2013 and there are three rules I must stick to:

Right, two out of three done, so on with the rest…

1. Your top five new favourite blogs to read in 2013
In no particular order as I have lots of favourites, here are five blogs that I discovered and really enjoyed in 2013. There are plenty of witty, laugh-out-loud, honest and life-affirming posts to be found among them. They’re all well worth a visit.

Dad’s the way I like it He’s multilingual, a top bloke and writes an award-winning blog too.
Just a Normal Mummy She’s really bloody funny. Impossible to read on the sly while at work!
Skint Dad Proof that you really can turn things around. A great guy and a great read.
Delusions of Candour She’s written some really thought-provoking posts about a variety of topics.
The Secret Father He writes beautifully and has also done much to promote dads and dad bloggers.

2. List your five most read blog posts of 2013
Excluding reviews, sponsored posts and competitions as I did rather a lot of them and they’re not really what I started blogging to do, the most popular ones were:

Honey, I’m home! My first post after making the bold move from Blogger to WordPress.
Choice An angry rant about people forcing their children to doorstep people.
Partner or kids. Who comes first? A sort of topical article based on an article I read in an actual newspaper.
Dances with woodlice Hasn’t every parent got a child who boogies with crustaceans?
My soft play hell This needs no explanation!

3. Name one blog you wish you had found sooner
That would be Kip Hakes. He’s been around for a while – and is annoyingly good too – so I don’t know how I didn’t become aware of him and his blog until last year. Glad I did though – it’s an excellent read and he seems like a top bloke.

4. Your favourite blog post of 2013
Without a shadow of doubt, it was My Postman Pat washing machine hell. It was ranty, a tad sweary and I learned how to fix a domestic appliance too as a result. Can’t be bad!

5. What would you like to improve (if anything) on your blog next year?
I aim to include significantly fewer reviews and sponsored posts in 2014. There’ll still be a few here and there, but I want to get back to why I started blogging in the first place and accumulating stuff and making money weren’t the things that originally motivated me.

6. Name one blog you have a blog crush on
Does Nina from Nina and the Neurons have a blog of her own? If not, why not? I’ve missed the point of this question haven’t I?

7. How often do you post?
At least once a week, but I’d like to post a lot more often. It all comes down to time really and I didn’t seem to have much of that at my disposal last year. Oh well!

8. Share your first post of 2013
That would be one called The label guy. It was about Xander’s obsession with eating the tags on his toys. Strange child!

9. Name one thing you would be doing if you weren’t typing this post right now
Sticking with the writing element of that and as it’s a time for doing things we promised ourselves we would do ages ago, I’ll say writing the script for the ‘zom-com’ I’ve had in my head for the last couple of years. It’s got some really unconventional characters in it and is set somewhere quite different too.

10. What have you loved the most about blogging this year?
Meeting new people online and in real life at BritMums Live. There are some amazing writers out there and it’s always nice to meet the people I’m secretly envious of.