We used to talk about boys who play guitars Kate and I went to a gig the other night. A real night out for the first time in ages. I still can’t quite believe we actually went somewhere other than the Harvester ten minutes up the road. We actually went all the way to London to see the excellent Maxïmo Park, no less.

I even have the ticket stub, a tour T-shirt and some blurry pictures to prove it. It was fantastic. We got to see our favourite band in their usual sparkling form and a great support act in Parisian group La Femme. We used to go to gigs fairly often, but this was the first in three and a half years. It was a great reminder of what live music is like.

Dylan has always enjoyed music. From the early days of rocking backwards and forwards to theme tunes in a way that, were he an adult, would look quite rude to jumping around to the current Hungry Hippos advert.

In a way, it’s reminiscent of Maxïmo Park’s frontman, Paul Smith at the concert the other night. Music has always got him moving. Well now he’s showing signs that he may yet be quite good at playing his own tunes some day too.

We were at my parents’ house for lunch a few weeks ago. As he often does, he made a bee line for their slightly out-of-tune piano – he and his older cousin are almost certainly the reason it doesn’t sound quite right, I should add.

After giving the keys a good hiding for a minute or so, he settled on a favourite note and started hitting it at regular intervals. My mum got out the metronome and started it up. Dylan played the note with the beat and, to prove it was no fluke, did so again when the speed was altered. Clever little thing! 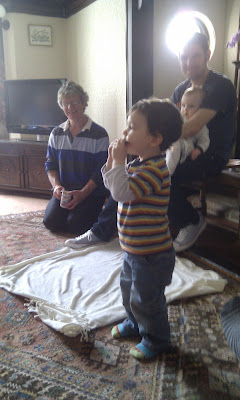 It didn’t end there, however, oh no! Some other relatives were there and their son who is one had a harmonica and ukulele in tow – as one does at such an age.

Dylan was offered a go on them and, although he came closer to doing what The Who used to do with the latter, he was pretty nifty with the former. Well, he’d have to be with the name we’ve given him. I was very impressed.

And envious of the aptitude this hints at too. I have a guitar that I can’t play, can’t remember anything on the piano from when I was a kid and got kicked out of recorder group at primary school for my apathy towards playing it.

Dylan has also started singing along with things and, despite our worries about his hearing when he simply refused to talk for so long, has shown himself to have a good ear. Plus he’s getting really quite wordy now – another Paul Smith attribute. Do we have a musical genius on our hands? It’s too early to tell, but the passion and the rhythm certainly seem to be there. And by the look of this picture, Xander wants to be in his band too… 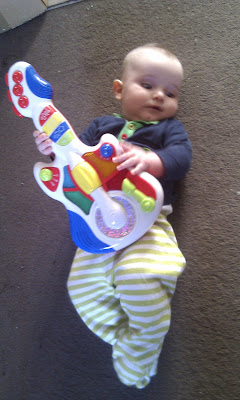